The Hidden Fort of Kumbhalgarh 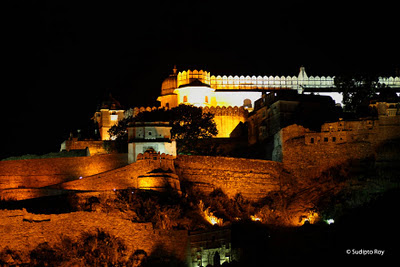 A few weeks ago, after much pestering by an office colleague, I wrote a travelogue for submission to Goodyear for selection in their Travelogue of the Month that is published in the magazine Geo. Although we went on a 4500 km round trip of Rajasthan I wrote only about the journey from Udaipur to Kumbhalgarh. To my mind that was the highlight of our trip. And no one really is interested in reading a long travelogue about too many places. So I kept the journey short.

Having written professionally for several years, I knew this piece of writing was going to get selected. Sure enough within a week or so I got a call from Delhi to that effect. A girl informed me that it was going to be published in the next issue and wanted some more details about the route. I felt quite elated really. Not because my travelogue made it. With hundreds of published bylines in The Economic Times, I don't really lust for bylines. My elation was in the fact that I could predict it successfully :-) If you have played football you know the feeling. You kick a ball towards the goal from a distance and you know it is going to go in and then it does.

However, within days they told me that Goodyear wants me to write more about the entire journey rather than such a short piece just on Kumbhalgarh. Reluctantly I did oblige them but I was quite disappointed that the "client" ruined a good travelogue. So, while Goodyear is happy to publish my "entire" story, here is the little travelogue that I wrote from my heart.

“WB 02V? Yeh kahan ka registration hai saab?” the curious petrol pump attendant asked me on NH 76 near Iswal. His curiosity and my car’s thirst quenched, I asked him in my broken Hindi: “Kumbhalgarh kaise jata?” (how do you go to Kumbhalgarh?) “Baye service road se daine le lo saab – bridge ke niche se. Aage pura likkha hai” (take the service road on your left hand side and then turn right under the bridge. It’s all written after that). 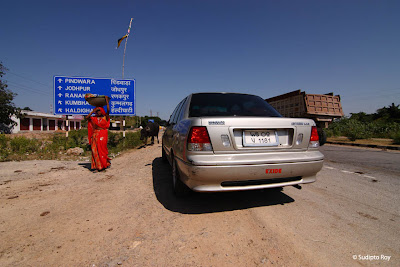 Iswal is just a dot on the highway NH 76

We were off to Kumbhalgarh and this last piece of conversation with the friendly attendant was a major confidence booster in this land that most Bengalis from Calcutta would consider very beautiful but alien. We had started from Udaipur early that morning and found this dot-on-the-highway called Iswal fairly easily. First come to Chetak Circle, next find out Sukhadia Circle; after that go towards Fatehpura and take the state highway that goes to Iswal.

“From Iswal it’s easy. Maximum an hour and a half”, said the DFO Udaipur the previous night. Although there are some plush high end resorts there, we are booked in the forest bungalow so kindly approved by him. 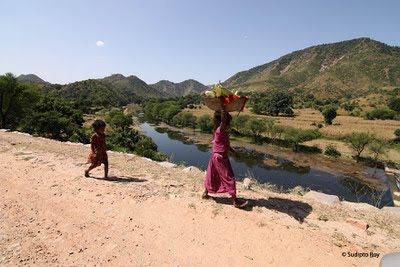 We met these two little girls on the way. But they were scared of us and ran away

This is our seventh day on the road. Starting from Calcutta we had spent nights (and a few days too) in Benares, Orchha, Bundi, Chittor and Udaipur. Driving on 4-laned highway is one thing but finding your way to a remote forest bungalow deep in the Aravalli mountains might not be an easy task, I had thought. I am the lone driver in my team of three – my wife, my daughter of eight and me. But soon I realised that despite being a very small place, the road to Kumbhalgarh is fairly well marked with adequate road signs and there is no reason to panic at all. 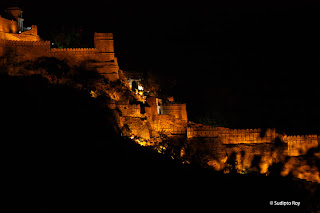 Kumbhalgarh Fort is most stunning at night


Kumbhalgarh is a quiet little fort. For certain mysterious reasons it is not very popular with the whistle-stop tourists to Rajasthan. Probably because like Ranakpur it is midway between the two major attractions of Udaipur and Jodhpur. People spend a maximum of two hours here en route from one city to the other. But they have no idea what they miss in this hurried visit. 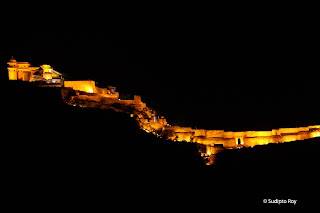 From a particular strategic point, far from the fort, the wall looks like a glorious necklace

Kumbhalgarh has history and nature. What it does not have is crowd and the liability of a dirty town. Not a very common combination that you find everywhere in India. And these factors make it highly desirable as an ideal destination for me. 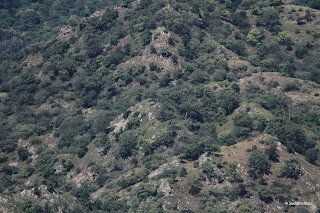 Now a little bit of history. When Chittor proved to be too weak to defend against repeated external attacks, Maharana Kumbha of Mewar decided to build a more secure fort and chose this site of ancient Jain temples to build his new fort. The deep forest makes it impregnable and safe and that’s why this fort has never really fallen against any enemy attack or occupied except for one very brief period.
Legend has it that a human sacrifice was made to ensure that the fort’s construction would be a smooth affair. A local priest offered this advice and also volunteered to sacrifice his own life for the sake of defending Mewar!! 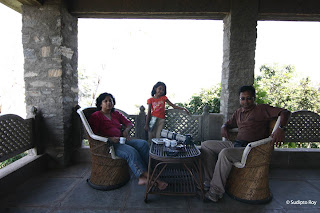 Breakfast, lunch or dinner - we spent our time looking at the plains of Marwar in the distance

The fort has a lot of history associated with it. This is the fort where Maharana Kumbha was subsequently murdered by his ambitious son. This was also where Maharana Udai Singh, who later built Udaipur, was hidden as a child by his nanny Anna Dhai when they realised that there was a threat to his life from the then regent. This fort was also the birth place of Maharana Pratap who fought the Moghuls most valiantly and is revered for his valour all over India even today. 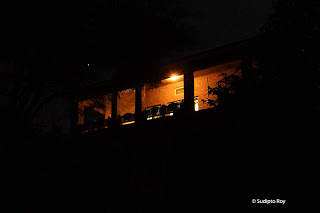 The bungalow at night. I saw a juvenile hayena here running away


When I finally reached the outer precincts of the forest bungalow (locally called Badal Guesthouse), some 11 kms from the fort complex and in the middle of nowhere, history of Kumbhalgarh was the last thing on my mind. The geography of the path in front was giving me cold turkey cramps in the belly. An almost vertical climb on loose stones where even walking down without support can be risky.
But I have noticed that fear is a purely a mental state. And once you do what looks very scary, there is nothing much to tell anyone. I just went up the hill and nothing really happened !!! Simple. Hah. Only I know what went through my mind with my wife and child sitting innocently next to me and completely impervious of the potential dangers. 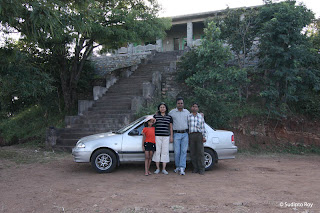 Geetanjali, Monisha, Me and Kesar Lal infront of the bungalow

Kesar Lal, the caretaker of the guest house turned out to be a friendly, extremely talented and efficient vegetarian cook. He served us the best khichdi I have ever eaten in my life as we spent hours looking at the plains of Marwar at a distance. The guest house, I measured with my GPS, is above 3500 feet and one can easily see upto 50 km or so in the distance.
After lunch and some bird photography of overhead flying raptors that turned out to be common buzzards, we went to the fort and stayed back for the brilliant light and sound show which tells the story of the fort and indeed of Mewar. The lighting of the fort is one of the most beautiful I have ever seen. From a distance it looks like a glorious golden necklace. The walls of the Kumbhalgarh fort is apparently second only to the Chinese Wall in terms of its length. However, sections of the wall have been acid cleaned recently and are looking like brand new. 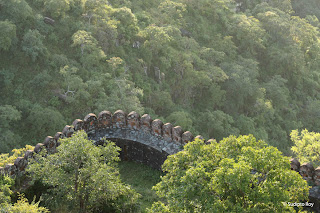 
Apart from the rugged and Spartan fort, Kumbhalgarh also boasts a beautiful wildlife sanctuary. It is supposed to have panthers, chousinghas and a host of different birds. There are various options to see this wildlife. We hired a four-wheel petrol jeep to the forest core area called Thandi Bheri. You can also hike it down to the spot with a guide. In fact it is also possible to hike to Ranakpur through the mountains. 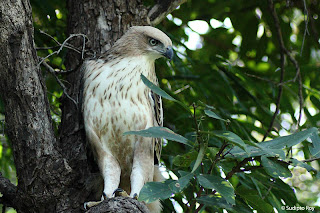 A juvenile Changeable Hawk Eagle from less than 8 meters with a 90 mm macro lens !!!

The jeep ride to Thandi Bheri and back is one of the toughest I have ever taken in my life. It is impossible to believe that it is actually possible to drive in a mechanised vehicle over those boulders.
Although we didn’t see any mammals I have no regrets. I concentrated more on birds and saw an eyeful of them. Among the ones I spotted were several plum headed parakeets, white bellied drongos, Tickell’s blue flycatchers, crested buntings and grey hornbills etc, not to speak of the other more common birds like coppersmith barbets or white browed fantails. But the most prized sighting for me was a juvenile changeable hawk eagle that we saw from a distance of about 15 feet. I have never seen a more powerful looking bird from such close quarters. 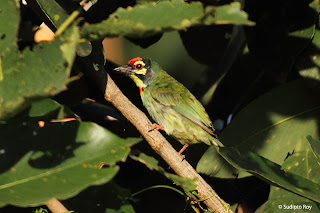 Regrettably enough, I had two nights and just one full day for Kumbhalgarh. So I couldn’t see the Parashuram Temple or do the hikes. But this is one place that I want to visit again and spend some more days in doing all that I couldn’t do this time. Perhaps my eight year old daughter will be older then and will be able to join me in the hikes.
Till then I will cherish the memories of those cricket calls in the night, the view of the necklace of a fort and that hawk eagle. I didn’t say good bye to Kumbhalgarh. We will certainly come back. I am sure it will stay just as pristine. 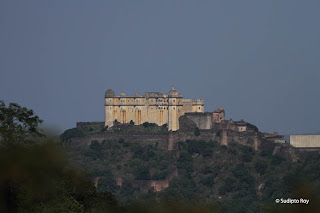 From the Badal guest house
Posted by Sudipto at 9:03 AM

Sudipto
I live and work in Calcutta which is where I was born and brought up. I started this blog because I think writing is the best way to express myself. I write to beat the blues. I feel very good when I write. I started this blog with two write ups that I had posted on this automotive forum whose member I am. But I intend to write my observations on various other things from time to time. I could have written these in a diary. But I think these days I feel more comfortable on the keyboard.

Prelude Before Durga Puja the one question that all Bengalis ask each other is “so where are you going this time?” This year, when... 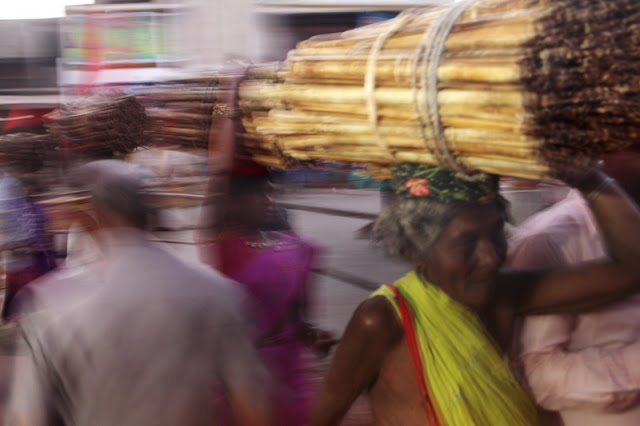